You see those trees with white flowers in the drone photo below from early spring 2020?

Those are pear trees growing in a southern Indiana plot where oak and pecan trees had been planted in previous years.  As the owner of that land will attest, however, those pear trees were not planted as part of his reforestation project.

In fact, as best owner Jerrod Carlisle can tell, those pear trees likely spread from two “dwarf pear trees” included with a “postage stamp orchard” he had bought by mail several years ago.

That postage stamp orchard turned out to be a really bad deal for Jerrod.  He soon found the dwarf pear trees produced no fruit any human could eat.  Even worse, the pear trees spread into his forest.  Only after the timber harvest and some research did Jerrod learn of the full scope of the problem he now faces.

Jerrod found out these were Callery pears (Pyrus calleryana).  The story of the Callery pear and why it was brought the U.S. is a fascinating one.  Originally, botanists collected its seeds in China to help buck up resistance of pear fruit trees in the U.S. to fire blight.  However, John L. Creech, who headed the National Arboretum in Washington, D.C., saw the Callery pear’s potential as an ornamental, and that’s how a variety of this species gained its fame under the name, the “Bradford Pear.”

The Bradford pear arrived on the market in the 1960s with fanfare.  According to January 5, 1964 edition of the New York Times: “Few trees possess every desired attribute, but the Bradford ornamental pear comes unusually to [sic] close to the ideal.”

But, why is this “ideal” ornamental trying to take over Jerrod’s forest?  If you read that New York Times article, many of the attributes that made it a good ornamental back in the day also make it a formidable invader today.

To tackle his Callery pear problem, Jerrod purchased our Large Foam Herbicide Dispenser Package in December 2019.  He started doing cut stump treatments this past winter.  As you can see from the area marked in red in the photo below, Jerrod has already made progress.  There are no blooming pear trees on the part that he treated. 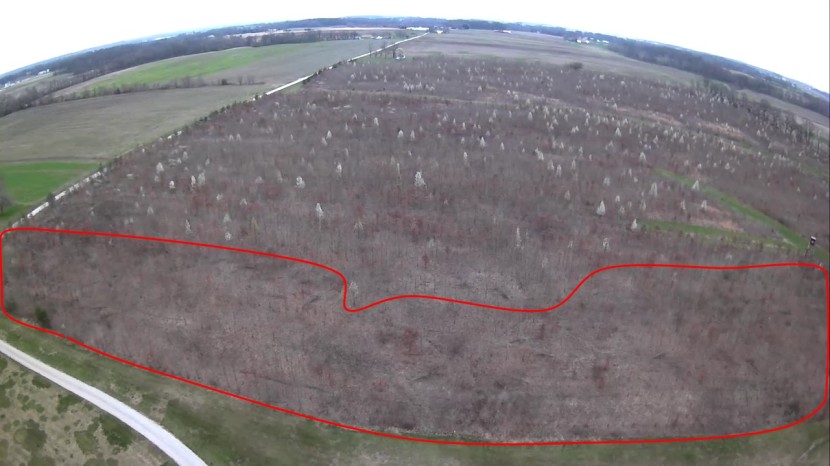 Jerrod has several goals with his work.  He wants to ensure the property serves as good wildlife habitat.  Jerrod is a hunter who enjoys spending time out in nature.

But if you talk with Jerrod, you quickly realize he also wants to raise awareness of the threat posed by the Callery pear.  As Jerrod noted, Interstate 69 was recently renovated near his home.  During construction, the right-of-way had miles of bare soil for extended periods of time.  Now Callery pear blanket miles-long stretches of that major highway.

And, all the while, more Bradford pears are coming on the market.  On March 30, 2021, I did a search online.  Here’s what it produced: